CUs and other cooperatives are collaborating to benefit communities—and each other.

The Downtown Eastside district of Vancouver, British Columbia, is known for high poverty rates and other social ills. Its residents have multiple barriers to traditional employment. But Sole Food (Sustainable, Organic, Local, Ethical) Street Farms is helping to change that by collaborating with a local credit union.

Vancity Credit Union has been involved from the beginning, providing grants and loans that have enabled Sole Food to get established and expand.

The organization grows and sells organic produce, and local residents are the “farmers” who tend the crops.

“They help improve food security in the community and provide meaningful employment that helps people feel valued,” explains William Azaroff , Vancity’s director of business and community development. “Some go on to find other work in local gardening or food businesses.”

Most recently, Vancity provided Sole Food with a loan and a $75,000 grant, with a goal of making the organization self-sustaining. The investment will allow the project to expand from one site to five, transforming disused urban spaces into gardens. Its workforce has grown from six people to more than 25.

This is just one example of Vancity’s many partnerships with other cooperatives, which include investments in organizations that:

“It’s the right thing for our members and our community, and the right thing for our business,” Azaroff says. “We believe in helping to build communities that can thrive socially, economically, and environmentally and this is one example of how we can do that. We collaborate with co-ops that need our investment and services—not our charity.”

“We are Canada’s largest financial cooperative and can meet community and individual needs that are not always met by markets and/or the government. Cooperatives are organizations that have a mission to better society. Working with other co-ops—becoming their financial institution of choice—is an increasing part of our business.”

He’s excited about the impact on Vancity, too. Its emphasis on improving quality of life in communities makes the credit union an employer of choice.

“We want to attract young employees and board members,” he says, “and we are finding that people graduate from college and really want to work with us because of our cooperative and values-based banking model.”

Cooperatives are rooted in communities, notes Chris Fraenza, impact manager at the Filene Research Institute. “They can help each other and meet the needs of their communities,” he says. “Look at Vancity’s focus on giving loans to co-ops.”

Vancity gave a loan to start a car-sharing service called Modo, which parks a hybrid vehicle at a Vancity branch for members to use. The two organizations are always looking for ways to partner for mutual benefit. Modo knows the car business, and Vancity has the financial resources. “They can leverage each other’s strengths,” Fraenza says.

“There’s a lot of cross-promotion in Austin, Texas, for instance, with credit unions promoting membership in food and student housing co-ops,” Beall says. “Members of those co-ops are moving their financial accounts into the credit unions.”

“If all four communicate a message, I’m four times more likely to pay attention,” she says. “And if I’m a member of three of the four, I’ll at least take a look at the fourth if I’m satisfied with the other three relationships.”

Many instances of collaboration probably go under the radar, Beall observes, because it’s so common. “Almost every credit union is involved with some form of collaboration. It starts with the CUSOs [credit union service organizations] they work with, and the shared branching network is a co-op.”

But collaboration isn’t universal—and credit unions can do more. The biggest challenge for non financial coops is access to funds and financial services, says Beall. Credit unions don’t always know their co-op brethren, and may not realize they have opportunities to work together. “That’s something NCBA CLUSA is working on, convening groups of co-ops and talking about how they can work together,” he says.

Credit unions and cooperatives have a lot to gain by working together. “One thing we strongly believe,” Beall says, “is that by promoting each other and talking to each other, co-ops can grow their memberships and create business opportunities. If a housing co-op promotes credit union membership to its own base, the members already have an understanding of what a co-op is, and it’s easier to get them to join another one.”

Everybody wins when consumer awareness of the cooperative structure grows, he says. “Each sector struggles to define how it’s different from for-profit competitors,” Beall says. “Promoting each other raises awareness of all co-ops.”

“Banks, grocery store chains, and other for-profit businesses pulled out of rural communities, while organizations like electrical co-ops and credit unions stayed,” he says. “They’re not there to be profitable; their local communities are their homes. They’re building trust with the co-op brand.”

Communities benefit when the economy is cooperative and local, Fearing adds. “Countless studies show more of your dollar stays in the community if you spend it at a local business. When co-ops team up and take a stand for promoting local businesses and a stronger, healthier local economy, that’s more dollars staying in my wallet and my neighbors’ wallets. It keeps housing prices up and increases the desirability of the neighborhood. Through a chain of events, the entire community benefits.”

While the trend is encouraging, we’re not there yet, adds Matt Davis, president of 6th Story and co-founder of CU Water Cooler. “The bigger for-profit competitors get, the harder it is for co-ops to compete. Big business can dictate the rules of trade, including pricing and service levels,” Davis says.

To keep pace, co-ops have to leverage their shared expertise, systems, and infrastructure. 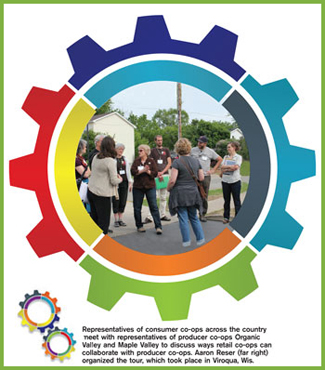 “It brings up the value of products and services, and gives consumers an alternative to traditional businesses,” Davis says. “Co-ops helping co-ops is really the only way they can survive.”

But credit unions tend to focus on chasing the same business banks do, Fraenza notes. “We need to do a better job of incorporating co-ops into our business model and filling that niche market.”

To do that, Fraenza advises credit unions to reach out to the communities they serve. “A lot of associations for coops exist, and that’s a good place to start,” he says. “Visit local co-ops and build messaging for them. It’s really business as usual. Ask if you can help them expand by lending to them, and suggest they keep credit unions top of mind as they grow.”

NCBA CLUSA tracks co-op associations, and can tell credit unions if they exist in particular communities, says Fearing. “If not, think about reaching out to other local co-ops and starting one,” she says. “See if they want to do joint education and marketing campaigns. Many times a credit union is in the best position to start an alliance because its business is money. Another co-op might not have $500 to run an ad.”

Fearing has experience in that area. She’s board president of the Willy Street Co-op—a Madison, Wis.-based natural foods cooperative. She also started the Dane Cooperative Alliance to help Madison and Dane County co-ops educate the community.

Outreach doesn’t have to be formal, Davis says. “Pick up the phone and call another co-op”, he says. “Have coffee and talk about your goals. We have to find ways to be a part of what they care about. You might think it’s a waste of time to go to an electrical co-op convention, but you have to find ways to be involved on their terms.”

Look at it as a business opportunity and make it strategic, advises Azaroff. “Don’t just provide handouts,” he says. “Think about what you as a credit union can contribute.”

Fearing agrees. “In the past, if another co-op reached out and asked for donations to sponsor an event, a credit union would be receptive and collaborate reactively,” she says. “Now we’re seeing more proactive collaboration, teaming up and growing our presence together.”

Fearing believes collaboration between cooperatives is on the upswing. “Only recently have credit unions and co-op businesses started seeing the value of being a collective local force.”

Beall says the concept springs up every decade or so. “But I think this is the one that takes. Co-ops are really starting to get that they need each other. Also, the recession changed consumer attitudes, and consumers are not satisfied just getting along with mainstream products.” What remains is to convince the unconvinced that this is important, he adds.


“Doing the right thing is important, but I’d focus on the business side,” Beall says. “I encourage credit unions to align with other co-ops because the people involved already get why collaboration is important. These are people willing to pick alternatives in food, housing, or electricity for a reason. Why not reach out in a business sense to consumers prewired for credit unions?”

It’s an interesting time for this to be happening, Fearing muses. “Credit union have reached a great milestone—100 million memberships—and it rests on credit unions’ shoulders to make the cooperative concept more mainstream.”

Credit unions certainly benefited from movements such as Occupy Wall Street and Bank Transfer Day. “This is another opportunity,” she continues. “Also, research shows that millennials rank their employers’ values higher than salary on a job-satisfaction scale, and that transfers to purchases.”

Fearing cites Tom’s Shoes as an example. For every pair of shoes bought, the company gives a pair of shoes to a child in need. That resonates with consumers, Fearing says.

Fraenza quotes Filene Research Institute CEO Mark Meyer: “ ‘There’s never been a better time to be a human being.’ People want to do business with transparent organizations. People want to help the world. Credit unions are a perfect fit, and if they align themselves with other co-ops, they’ll gain more business.”