'The more co-ops support each other, the stronger they become.'

If you shop for food at Seward Community Co-op in Minneapolis and use your co-branded Seward/Spire Credit Union Visa card, part of the transaction price goes to the co-op’s Seward Community Fund, which benefits various local nonprofit organizations.

“We’re following the cooperative principals, which go all the way back to 1895,” says Tom Vogel, Seward’s marketing manager. “The more co-ops support each other, the stronger they become.”

Seward is one of four local food cooperatives to partner with Spire Federal, where a portion of each Visa card transaction is donated to each individual co-op’s nonprofit fund . “Each fund supports a different sustainable cause,” explains Tara Graff, director of marketing for the $620 million asset, Roseville, Minn.-based credit union.

One co-op, The Wedge, is located in an area of the city where people value healthy food, and it’s growing quickly, Graff reports. “Its fund supports a field school that educates people about producing food. It also hosts resource fairs for co-op members, and we have a presence there to get the word out about the credit union.” 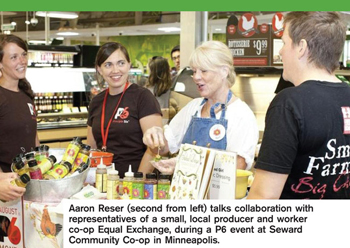 The credit union attracts new members as people open Visa accounts through the co-op. “And I think there’s a lot more potential if we really market the programs,” says Graff.

The key to forming collaborations is to reach out to other co-ops and start the initial conversation, she notes. “There’s a lot of receptivity right now to the cooperative philosophy, and by joining forces we’re twice as powerful. People are looking to keep their dollars in their local communities.”

Aaron Reser, national coordinator of Principle Six (P6) Cooperative Trade Movement, works with food co-ops. “Credit unions and cooperatives have a unique, great business model and an important story to tell,” she says. “Often we don’t do a good enough job of telling this story.”

She advocates educating communities on the benefits of credit unions or other cooperatives—and promoting collaborations such as the Seward/Spire partnership does just that.

“When we collaborate, it creates another opportunity to educate our community, tell our story, and generate new interest in joining our co-ops and credit unions,” she says.