Program educates consumers age 21 to 35 about the benefits of CU membership. 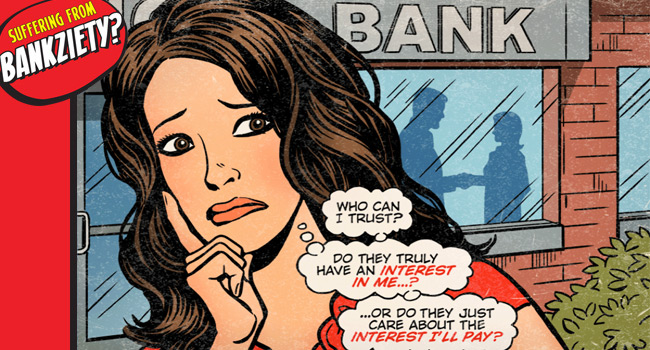 The Minnesota Credit Union Network’s (MnCUN) “Bankziety” program recently gained national attention after being mentioned in an article by The New York Times.

The program, which spreads the word to consumers about the benefits of credit union membership, has been a creative and successful effort for MnCUN.

Connie Kuhn, MnCUN’s director of communications, recently shared how the campaign is progressing.

CU Magazine: How did the program come about?

Kuhn: Bankziety is aimed at educating consumers age 21 to 35 about the benefits of credit unions. It was launched in 2012 to raise awareness about credit unions and encourage consumers to switch to a credit union.

The main message of Bankziety is that credit unions exist to serve members, not profit from them. They offer many of the same services as big banks but with the added benefit of lower loan rates, fewer fees, and personalized service.

The trademarked term “Bankziety” is defined as “uneasiness, distress, or mental apprehension, usually over an impending interaction with a bank, anticipated financial stress, and fearful concern over banking fees and rates.”

Bankziety gets people thinking about credit unions as a smarter financial alternative in a fun, compelling, and engaging way.

In 2013, MnCUN conducted a public opinion poll to gauge Minnesota consumers’ knowledge and perception of credit unions and other financial institutions. Data gleaned from the research study included key messages and recommendations that credit unions could use to attract and retain members, and it also prompted a refreshed look for the Bankziety campaign.

CU Magazine: What are the various components of the program?

Kuhn: The hub of the Bankziety campaign is a colorful, pop-art themed website that features a “Symptom Checker” and provides helpful advice for financial planning at pivotal stages of life such as planning a wedding, purchasing a home, budgeting for a baby, and preparing for retirement.

The website also features a "Find Your Cure” search tool which allows visitors to find the Minnesota credit union that is right for them through the powerful, nationwide search engine.

Last year, more than 500 searches for Minnesota credit unions were conducted on the “Find Your Cure” page on the Bankziety website. That number continues to grow and increases the overall awareness of credit unions.

Other features on the website include information comparing banks and credit unions, as well as money management tips and consumer testimonials.

CU Magazine: What do you hope to accomplish with Bankziety?

Kuhn: The Bankziety campaign acknowledges common problems consumers face in their financial lives and provides education and resources to help diminish these frustrations.

With this campaign, the Minnesota Credit Union Network hopes to educate consumers and policy makers that as local, member-owned community partners, credit unions have emerged from the financial crisis well-positioned to be “the cure” to consumers’ Bankziety.

CU Magazine: The New York Times recently mentioned Bankziety. How did that come about?

Kuhn: MnCUN didn’t work directly with The New York Times on the November 2014 piece. But since it was launched, Bankziety has been featured in many national, regional, and local media channels including The New York Times.

Most of the coverage received has been by outlets that cover the financial industry.

This publicity has been great exposure for Bankziety and has kept the campaign top-of-mind in the industry.

CU Magazine: How might the program evolve in the future?

Kuhn: We are always looking for ways to keep Bankziety fresh and relevant for both consumers and credit unions. Currently, we are working on our strategy for 2015 and determining the next steps for Bankziety.

We constantly have our ear to the ground looking for financials tools and advice that will most benefit consumers. Going forward, we want Bankziety to be a resource consumers look to when they are approaching major financial decisions.

CU Magazine: What advice would you offer other credit union organizations about spreading the word about credit unions?

Kuhn: We continually encourage credit unions to be more proactive in sharing their stories. We need to banish the mentality that credit unions are the “best-kept secret” in the financial industry.

We need to share information about our programs and products offerings, our community connections, and all the things that differentiate credit unions from for-profit financial institutions.

It’s actually asking credit unions to shift their mindset. As a humble industry with deep roots, too many people are hesitant to “brag” about the great work they’re doing. We want to change that!

Developing relationships with local media contacts is also valuable in educating consumers about credit unions. MnCUN has developed the MN Credit Union News website [http://mncreditunionnews.org/] to capture the ways Minnesota credit unions are helping their members and communities every day.

As MnCUN CEO Mark Cummins has said, “uncertain financial times left many consumers confused about who they could trust when it comes to their money, but Minnesota credit unions have the cure for their Bankziety.”