World Council initiative aims to tell consumers that CUs have the financial services they want.

PHASE ONE: Executives from Australia, Canada, and the U.S. initiated the first “Build the Brand” workshop in 2012 to find innovative ways to convey the “CU difference.” (Photos courtesy of World Council)

A World Council of Credit Unions initiative is bringing together credit unions and technology experts around the world to build the global credit union brand.

The initiative, aptly named “Build the Brand,” aims to tell consumers that credit unions have the financial services they want.

It was developed over three years in three phases and produced a new education program geared to millennials called “weCU2.” Here’s how it came to be:

The effort launched in 2012—with funds from Vancity Credit Union in Canada—at a workshop in which leaders compared credit union messaging from the U.S., Canada, and Australia.

World Council tested the various messages with consumers and found discrepancies between what credit union “believers” thought would resonate with today’s consumers and what actually did.

A year later, the most appealing consumer messages from phase one were brought back in phase two. Initiative participants used those messages to develop creative execution strategies.

Through workshops and a webinar, experts worldwide focused on millennials and exchanged best practices for reaching them through social media. That led to the final phase.

Through these channels, millennial and industry experts engage in honest, unscripted conversation to build stronger relationships with credit unions.

Stay connected with the weCU2 program on Twitter (@_weCU2) and join the conversation with the hashtag #weCU2. You can also get updates on the program’s blog at weCU2.org.

PHASE TWO: A phase two workshop on CU strategies for reaching millennials through social media, held at the 2013 World CU Conference, attracts a standing-room only crowd, with about 400 people in attendance.

PHASE TWO: CU and trade association marketing executives from Australia, Brazil, Canada, Korea, and the U.S. meet for a workshop focusing on developing strategies for CUs to reach Generation Y through social media. 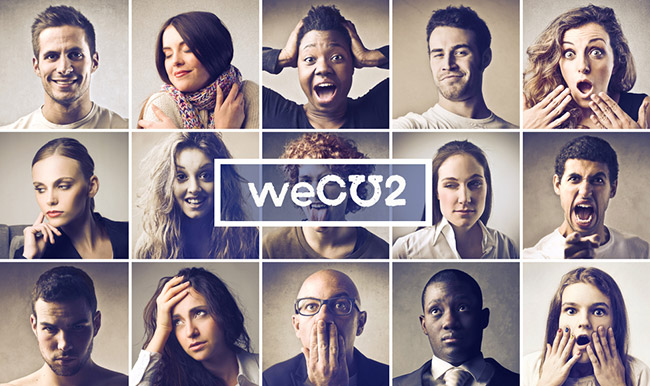 PHASE THREE: World Council's weCU2 program will be featured at a breakout session in July at the 2015 World CU Conference in Denver, co-hosted by CUNA and World Council.

PHASE THREE: Maggie Lin, a marketing specialist with Vancity CU, introduces weCU2's goal: to familiarize and educate millennials on how their values correspond with CUs; and to give CUs a full understanding of millennials' unique needs and "digital DNA."