ERAYNE GEE-HILL, vice president of marketing at $220 million asset Unity One Credit Union in Fort Worth, Texas, is rarely described as “shy.”

She is vocal about her passion for the credit union movement. Her enthusiasm for her work, family, and even cupcakes is contagious. And she recently envisioned a marketing campaign that turned heads. 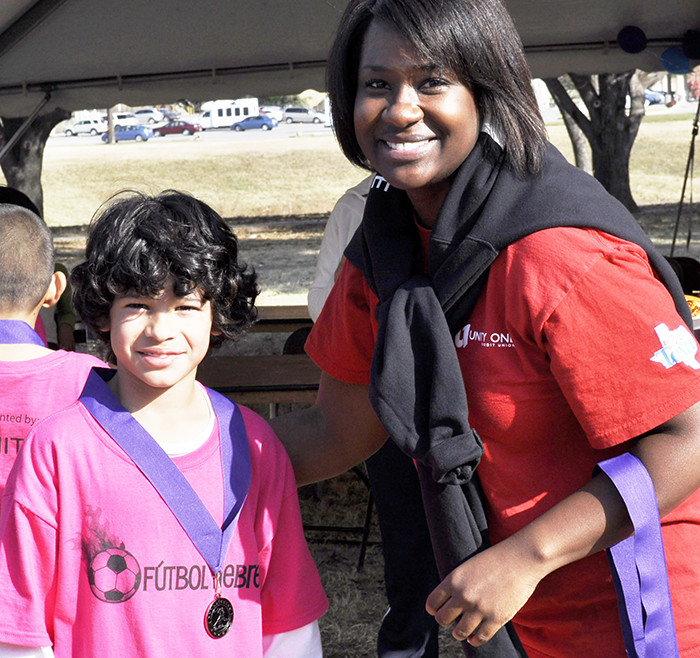 Erayne Gee-Hill participates in Futbol Fiebre, a community soccer tournament held across the street from her credit union’s branch. The event has strengthened the Unity One CU's reputation as a leader in Hispanic outreach.

The attention-grabbing campaign, which was a collaboration with Unity One’s CEO, was called “Don’t Get Spanked by the Banks.”

“She envisioned an edgy marketing campaign in conservative Fort Worth that produced amazing results evidenced by solid metrics,” Reed says.

“It is a humorous campaign that we hoped would increase brand awareness and raise eyebrows, and, boy, did it ever,” Gee-Hill says. “We wanted consumers to know that managing their finances shouldn’t feel like a punishment, especially when you bank with knowledgeable people that are striving to make your experience simple, easy, and hassle-free.”

Reed describes Gee-Hill as an “innovative and passionate visionary,” who gives countless hours to her league, working as the chair of its Marketing and Business Development Council.

In that position, she raised the bar on the state awards program and led the group back to profitable operations. She also serves on the league’s Communications Advisory Committee.

“Erayne is a collaborator, who always puts the needs of others first and can be counted on to deliver excellent results with grace while under pressure,” Reed says.

“I’m passionate about this industry because its social responsibility philosophy and collaborative spirit truly make it unique and something to be proud of,” she says.

And at the end of the day, she’s even more enthusiastic about her family: her husband James and son Trevor; her parents, who live close-by; and the family pets, which include two fire-bellied toads.