Singing the Praises of Financial Literacy

'I'm passionate about our core purpose, financial education, and telling our story.'

IT’S NOT UNCOMMON for Jennifer McHugh to break into song while spreading the word about the importance of financial literacy, as well as credit unions and their role in communities.

“I try to have some fun with it,” says McHugh, director of public affairs and financial education for $1.5 billion asset Royal Credit Union in Eau Claire, Wis. 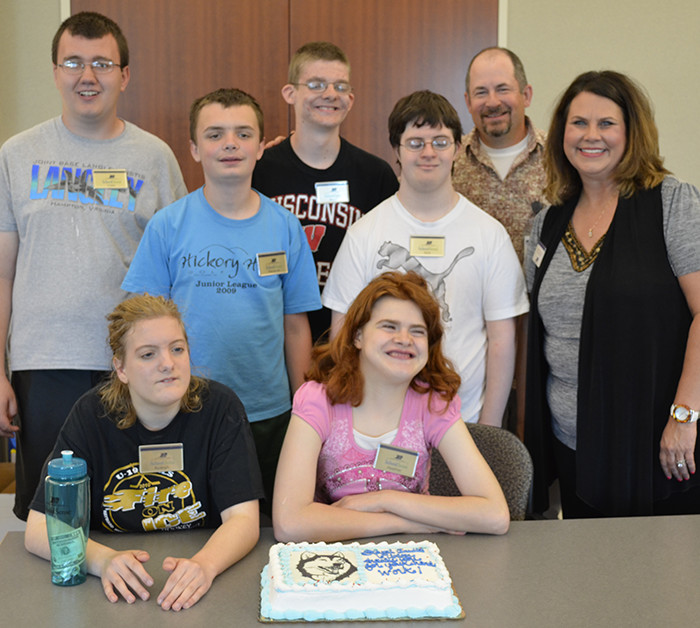 Jennifer McHugh (far right) celebrates the positive contributions of a group of high school students at Royal CU. The students worked at Royal once a week during the school year.

In introducing a new program called Blue Crew for a Cause, which encourages staff members to volunteer, she sang Luke Bryan’s “High on Summertime” to an audience of more than 500 people.

Before the 2014-15 school year, a high-school teacher approached McHugh and proposed that six special needs students spend a couple of hours each week working at Royal.

McHugh agreed to the idea, but worried about how to make this experience meaningful for the students and for Royal. She began each day with a short lesson on money, then assigned the students projects such as counting inventory, assembling mailings, and filling gift baskets.

On the day of a scheduled visit, McHugh was slated for an interview at a local television station about the Royal Credit Union Charity Classic run. So, she arranged for the students to accompany her to the studio, where staff gave them a tour and allowed them to deliver a mock weather forecast.

“I was scared about the project at first, but it turned out to be the best thing that happened to me all year,” McHugh says. “Do what makes you scared.”

McHugh, who sits on the Wisconsin Governor’s Council on Financial Literacy, partnered with the University of Wisconsin-Madison on a two-year study assessing financial education. Royal, the only credit union involved in the research, operates 28 in-school branches.

The study examined whether fourth- and fifth-grade students were more likely to improve and retain their financial knowledge through classwork combined with the experience of opening and using an account at a school branch, compared with students who received only the lessons.

If teachers felt ill-equipped to deliver the lessons, a Royal employee—often McHugh—would fill in.

“When you look at the root of a lot of problems at home, it’s money,” she says. “If we can reach kids with education, they’ll live happier, more successful lives.”