She's First to Try, and Last to Throw in the Towel

'She’ll listen to a random thought or crazy idea and can almost immediately turn it into something tangible and powerful.'

AMY WICKHAM would “like to convert everyone to be a credit union member.”

That type of passion has carried her through her first job as a veterinary assistant for her father in rural Iowa to her current position as assistant vice president of marketing for $1.3 billion asset Dupaco Community Credit Union in Dubuque, Iowa. 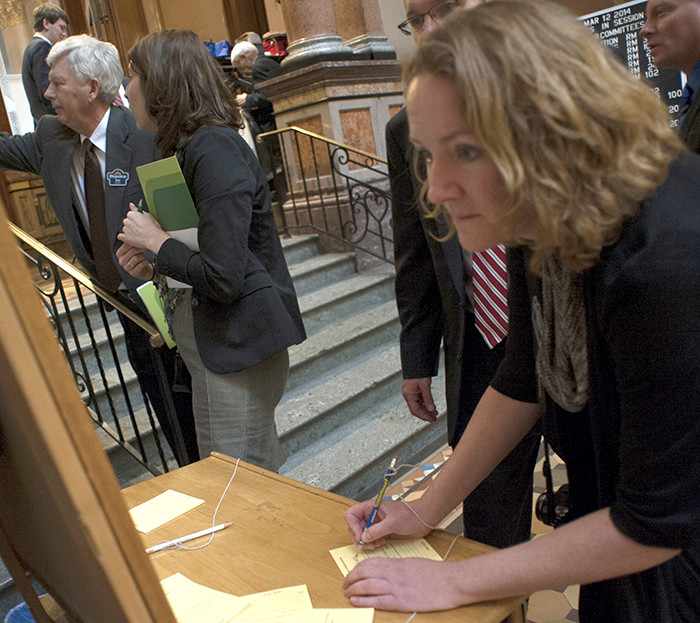 At the Iowa State Capitol in Des Moines, Amy Wickham fills out a form to schedule a meeting with a state senator to discuss pending credit union legislation.

She’s never been afraid to roll up her sleeves and dive in. At a young age, her father saw that determination and made her a vet’s assistant, charging her with duties many others would cringe at.

That tenacity, along with her parents’ encouragement, has continued to serve Wickham on her career path. After earning a B.A. in journalism and mass communication from Iowa State University in 1992, she started as a technical writer for a local software company. She advanced to positions in design and marketing before becoming the art director for a local ad agency. In 2003, she began marketing for the Greater Dubuque Development Corp., an organization funded by local businesses.

“It was an exciting time. The riverfront was really coming alive with business,” Wickham says. “I was happy to be part of that.”

But after five years, she needed a change. So she talked with one of the organization’s board members, Bob Hoefer, who, at that time, also was Dupaco’s CEO. Soon after, she joined the credit union’s marketing team. Similar to when she joined Greater Dubuque Development, Wickham came to Dupaco as it was entering a time of tremendous growth.

“The movement could learn from Amy’s fearless and passionate approach to marketing,” says Melissa King, Dupaco’s assistant vice president of business partner services. “Amy inspires others to do more and do better. Her ability to think outside the standard marketing toolbox provides a fresh approach to member education—from soup cans relabeled ‘Souper Credit,’ listing the ‘ingredients’ to raise a credit score; to ‘gamifying’ products and services through a Dupaco-ized version of ‘Operation.’ She’ll listen to a random thought or crazy idea and can almost immediately turn it into something tangible and powerful.”

A merger has increased Dupaco’s branch network from five to 19, providing the opportunity and challenge of marketing the credit union to new communities. For Wickham, it’s meant producing original, creative content for each of the branches as well as developing eye-catching material for distribution to the nearly 1,000 partner companies in the credit union’s charter area.

“Her innovative ability to make just about any topic appealing,” King says, “has allowed Dupaco to dominate other financial institutions in the number of partnerships within the workplace.”