‘Our employees said, ‘We want to help.’ They were ready to go.’

When an employee at North Districts Community Credit Union, Gibsonia, Pa., unknowingly exposed co-workers to the coronavirus (COVID-19), much of the staff, including CEO Paul Fero, had to be quarantined for two weeks.

“They were set up with two temporary teller IDs so they could do transactions and all the daily work North Districts’ tellers do,” says Sandi Carangi, president/CEO of Mercer County Community Federal, who explains the credit unions use the same core processing system. “Everything is the same as our system, but they’re serving members of a different credit union.”

Perhaps never before has collaboration been so important, as credit unions continue to address challenges posed by COVID-19 and other issues. Consistently, credit unions use their “superpower” to serve members and protect employees.

“This situation has been so fluid, and we need to support each other now more than ever,” Carangi says. “Fortunately, credit unions have always done that. In this instance, you knew someone could be exposed to the virus because we serve the public every day. Providing a solution shows the true value of collaboration.”

Carangi credits CEO Paul Fero and North Districts’ board for coming up with the idea, her board for approving the reciprocity agreement, and her staff for their willingness to serve North Districts’ members. “Our employees said, ‘We want to help.’ They were ready to go.”

Fero says he began projecting how COVID-19 could impact his credit union operations in February. “Having been caught up in a cyberattack at my previous credit union, I’ve come to expect the unexpected,” he says.

“The staff who filled in did an amazing job,” Fero says. “With detailed notes and step-by-step instructions through phone calls walking them though new processes, they were able to continue our normal operations.”

Carangi says the CUNA Councils Community has been a valuable collaboration tool during the pandemic, as well as in normal times. The online communications platform allows Council members to network, discuss important issues, and work together to solve problems.

The CUNA Councils also offer online chats on important business issues. Carangi says the communities have been “invaluable” during the pandemic.

“I once worked for a community bank,” Carangi says. “Banks don’t do this. This is a huge advantage for credit unions at a time like this.”

Again, Carangi shares an example of when Mercer County Community Federal renovated one of its branch offices.

“We wanted to make sure we were doing it the best way possible for our members and employees,” she says. “We thought, ‘What better way to do that than to look at credit unions that have done similar projects.’”

Carangi arranged visits with four credit unions within driving distance from the credit union, hired a van and driver, and set aside a day for a field trip.

“The people from each credit union were so helpful and welcoming,” Carangi says. “We spent an hour or two at each one. They told us what worked for them and what didn’t work. They took their time and walked us through everything.”

Looking at multiple branches provided valuable insights. “Each branch was different,” she says. “We could take ideas from each one and identify challenges that each branch faced with challenges we were facing.” 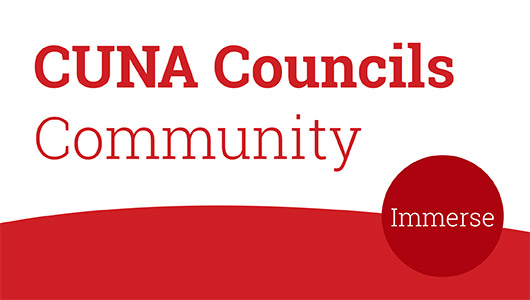 Carangi says the visits helped take the guesswork out of planning her renovation projects. “Our project incorporated something from each of those credit unions,” she says. They took so much of the legwork out of the process for us, and saved us time along the way.”

Now, “there is a piece of every one of those credit unions” in Mercer County Community Federal’s renovated branch, Carangi says.

“What’s even nicer is that those CEOs showed up at our ribbon-cutting ceremony,” she says. “When we opened this newly renovated branch, they were there.”

Collaboration doesn’t happen by chance, however. It requires agreement and partnership, sharing and commitment.

The best place to start: Ask.

“People are so gracious,” Carangi says. “Virtually everybody is willing to share ideas. You just have to be willing to ask.”