When Anna Wallace sees something that could be done better or more efficiently, she immediately forms a plan to improve it.

She had only been at the credit union for three months when she put together a proposal explaining how Wrike could help the team become more efficient.

Her supervisors were impressed by the unexpected proposal. With Wallace leading the implementation of the new tool, her team embraced it quickly. 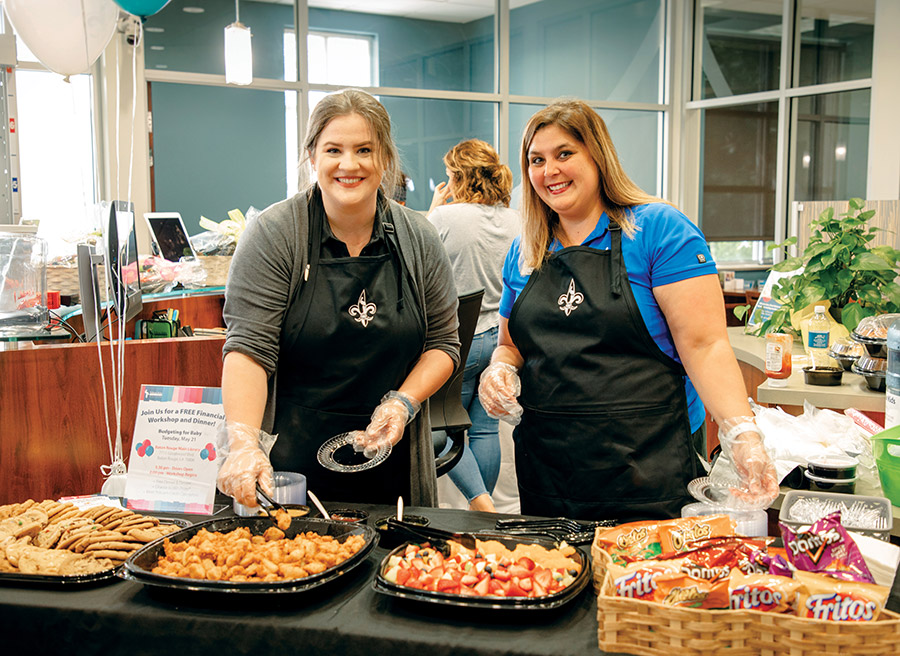 Click to enlarge. Anna Wallace and a co-worker serve up good food and financial education for members.

“The impact is immeasurable,” Wallace says. “It makes us a lot more efficient, and it’s helped us with transparency and accountability. If we had to go back to emails and spreadsheets, I would lose it.”

Wallace entered the credit union movement as a Wrike enthusiast, but she quickly became a huge fan of the movement as well. Before she applied for the marketing specialist job at Pelican State, her husband got a business loan from the credit union for a new lawnmower after getting multiple rejections from other lenders.

“When I saw the job posting, I knew that’s where I wanted to be,” Wallace says. “We’re able to help so many people who would get turned down otherwise.”

In 2019, Wallace spoke at the Wrike user conference to share how the tool had improved Pelican State’s processes.

“Her advice was so well-received, it drove a lot of the attendees to ask more about the credit union movement,” says Pelican State Marketing Supervisor Frank Kerner.

Wallace says she’s most proud of stepping outside her comfort zone to propose a different creative direction for a holiday loan promotion. The concept she suggested ended up driving one of Pelican State’s most successful unsecured loan promotions.

“I love that in my job I’m trusted and my leaders empower me to grow personally and in my career,” Wallace says. “It’s because of them that I feel so comfortable suggesting changes to our workflow and improvements to the member experience.”