At our best when times are toughest

Credit unions shine during crises while banks hunker down.

The Federal Credit Union Act was enacted when banks failed to lend to average consumers and Main Street businesses during the Great Depression.

Policymakers recognized that promoting member-owned credit unions would ensure these institutions were firmly focused on helping average consumers through the crisis as quickly as possible.

Since then, history has shown us that for-profit banks hunker down during times of economic crisis. Their focus centers around protecting capital to maximize shareholder value.

Credit unions, however, view capital as a war chest to be built up during good times and used when times are tough. It’s why we’re able to consistently respond to crises as financial first responders.

Consider credit unions’ response during the pandemic: Total credit union loan balances increased 4.7% in the year ending June 2021 while bank loans fell by 1.3% during that time.

Think of the stories you heard about businesses that couldn’t get Paycheck Protection Program loans through their longtime banks, or of the members who needed loans that were too small to make it worth a bank’s time and effort.

Credit unions met those needs time and time again, and the data shows members recognize we’re there for them.

‘I’m proud to be a part of a movement that fosters trust, puts people first, and makes a real difference.’

Credit union membership historically grows faster than the population in the wake of crisis, and that’s even more true during the pandemic. Members trust their credit union to meet their needs because we deliver—and word gets around.

Credit union membership grew 10 times faster than U.S. population growth in the year ending June 2021. This 4% growth is stronger than the three previous recessions, each of which saw 1.9% annual growth.

These numbers paint a picture, and it’s that credit unions continue to be at their best when things are at their worst. 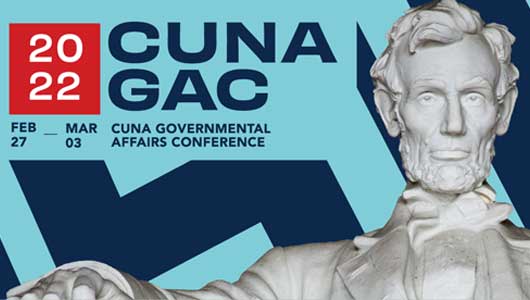 In today’s fast-paced world, people need access to their money, someone to answer their questions, and someone who can provide the tools to live their best financial lives.

This pandemic has shown that not-for-profit financial cooperatives have a vital role to play in getting consumers back on their feet—a role that for-profit banks can’t or won’t play.

It’s why we continue to advocate to do more because we know we’re capable of it. Think of the good we can do with a modernized Federal Credit Union Act that lets credit unions focus on the people and places banks aren’t serving, even during good times.

Trust is a valuable part of any business relationship, and it can’t be faked. It’s earned. Today’s credit union leaders help us continue to earn it.

I’m proud to be a part of a movement that fosters this sense of trust, puts people first, and makes a real difference, especially when things look their toughest.