Jon Paradise knows his audience. It’s a skill he began honing at age 12, when he took his first on-air shift voicing overnights for a radio station.

That spawned a nearly two-decade career during which Paradise learned how to quickly build rapport with invisible audiences full of strangers. 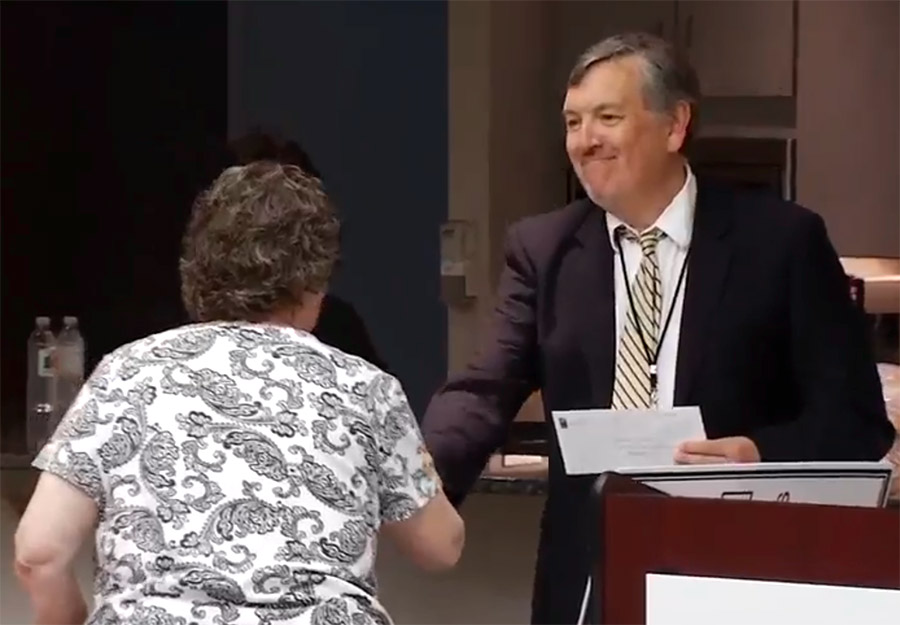 Click to enlarge. Jon Paradise made great strides in increasing state CUs’ participation in the Maine CUs’ Campaign for Ending Hunger, which has raised more than $6.5 million since 1990. Here, he presents a check to a food pantry representative.

He was good at it. People wanted to talk to him. “I got calls from listeners all the time,” Paradise says.

Eventually he found his way to the credit union industry, first as a member frustrated with high bank fees and now as vice president of governmental and public affairs for the Maine Credit Union League, where he has promoted the industry for 16 years.

One of his first projects was managing the Maine Credit Unions’ Campaign for Ending Hunger. He built partnerships with local vendors, but his biggest focus was increasing participation and commitment.

Now every credit union in the state joins in. “Part of my challenge,” Paradise says, “was to get credit unions to own their campaign, to not see it as the league’s campaign but our campaign.”

While researching the former presidential adviser, Paradise discovered Sorensen was from his mother’s hometown in Nebraska. When he stumbled on an email address, Paradise collected as many details as he could recall of his mother’s Nebraska story into a message and sent it on a lark.

Surprisingly, Sorensen recognized the names and places Paradise mentioned. He so enjoyed the opportunity to revisit his Midwestern roots and meander along memory lane that he agreed to help a “fellow Cornhusker” for a fraction of his usual fee.

The collaborative credit union industry tends to breed advocates like Paradise, who’s always looking for common ground. And it’s no surprise that he would find it here.

“It’s hard sometimes to quantify what makes credit unions so special,” he says. “But it’s such a personal connection.”