An indication of the degree of community impact—and depth of the issue—came in January 2018 when then-Attorney General Jeff Sessions rescinded the Cole Memo.

The true linchpin, however, was the FinCEN guidance the Department of Treasury issued.

Not knowing whether this would be withdrawn as well, Pross began taking the necessary steps to unwind Maps’ cannabis program based on the exit plan the credit union had built before entering the business.

This included ordering $30 million of cash from the Federal Reserve to have on hand should associated accounts need to be liquidated.

Pross also began scheduling time for account holders to visit the branch—with armed escorts—to retrieve those balances in cash. Discontinuation of the program would have released $30 million onto the streets, a figure that has only grown since.

Fortunately, the situation proved to be merely a drill. FinCEN stood by its existing guidance and the U.S. attorney with jurisdiction for Oregon, which now has prosecutorial discretion over pursuit of area financial institutions, issued a memorandum regarding his priorities on marijuana enforcement.

These aligned with the tenets of the Cole Memo. “It was a great test of our exit strategy,” Pross says.

To date, no U.S. attorney’s office has expressed interest in pursuing action against such institutions. Guy Messick, president of the legal and consulting firm Messick, Lauer & Smith, questions the wisdom of any other stance.

“Preventing these businesses from using financial institutions would create more problems than they’d be solving,” he says.

One lesson learned is the prescribed 24-hour wind-down was not in the best interests of employee or community safety. Numerica’s contingency plan contemplates a month-long process, during which Ciani and her team would line up appointments with affected account holders and determine the best method of funds remittance.

A trend toward legalization 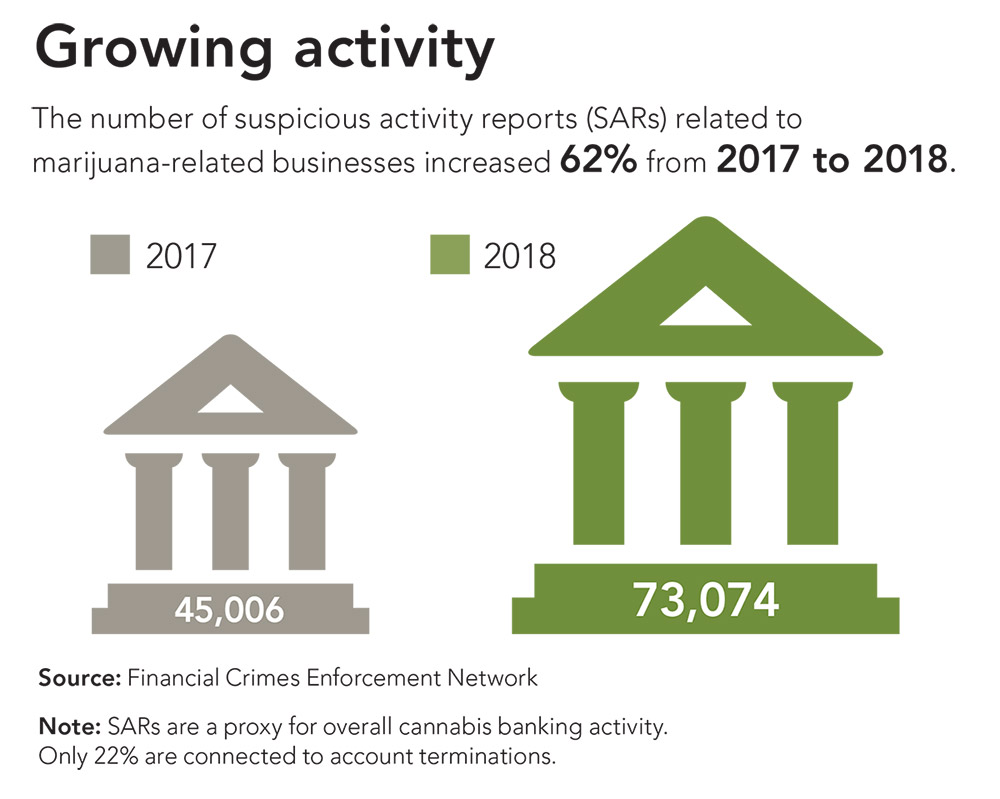 With the Cole Memo in the rear-view mirror and a clear trend toward legalization in states across all geographies, more credit unions are quietly exploring opportunities. An anecdotal metric is the number of requests these early movers are fielding for informational sessions.

O’Gorman estimates “30 to 40 states” have reached out to her firm for additional information, and between them, Pross and Ciani have spoken with credit union groups in Florida, Oklahoma, Michigan, Massachusetts, and throughout the Midwest.

“Once Treasury announced they’d stand behind the FinCEN guidance and no U.S. attorneys pursued action, a lot of the shock effect wore off,” Messick says.

The fact remains that cannabis is illegal under federal law, however, and a shift in enforcement policy is hardly implausible.

The first traction to address this conundrum on a federal level came earlier this year, when the CUNA-backed Secure and Fair Enforcement (SAFE) Act was the first to receive a hearing in the new Congress following the government shutdown.

The SAFE Act would provide financial institutions with a safe harbor in states where cannabis has been legalized—with the key requirement that the state regulator has authorized and implemented a compliance structure.

Rep. Ed Perlmutter, D-Colo., who has a unique vantage point on the issue’s impact on his state, has championed the legislation.

The timing of the hearings is “a testament to how strongly Rep. Perlmutter has been advocating this point,” says Jeremy Empol, vice president for government affairs at the California and Nevada Credit Union Leagues.

Pross testified at the five-hour hearing, which is available for viewing.

“If you watch the questions, you realize that people—and more so members of Congress—really don’t understand the depth of the problem,” says Empol. “Rachel made a great point that law enforcement relies on financial institutions as partners: a first set of eyes for the Bank Secrecy Act [BSA].”

Without bank accounts, there’s one less access point for law enforcement, he says. “We need to bring the business out of the shadows so law enforcement can figure out if Joe’s Pot Shop is really that or a front for something else.”

Despite SAFE’s passage from committee on a 45-15 bipartisan vote, with more than 150 co-sponsors having signed on in support, “the path to law is not crystal clear,” Empol concedes, with Senate priorities a key hurdle.

“But we’re further along with the bill reported from committee than we’ve ever been before,” he says. “The pressure is building on Congress to do something.”

NEXT: A labor-intensive business